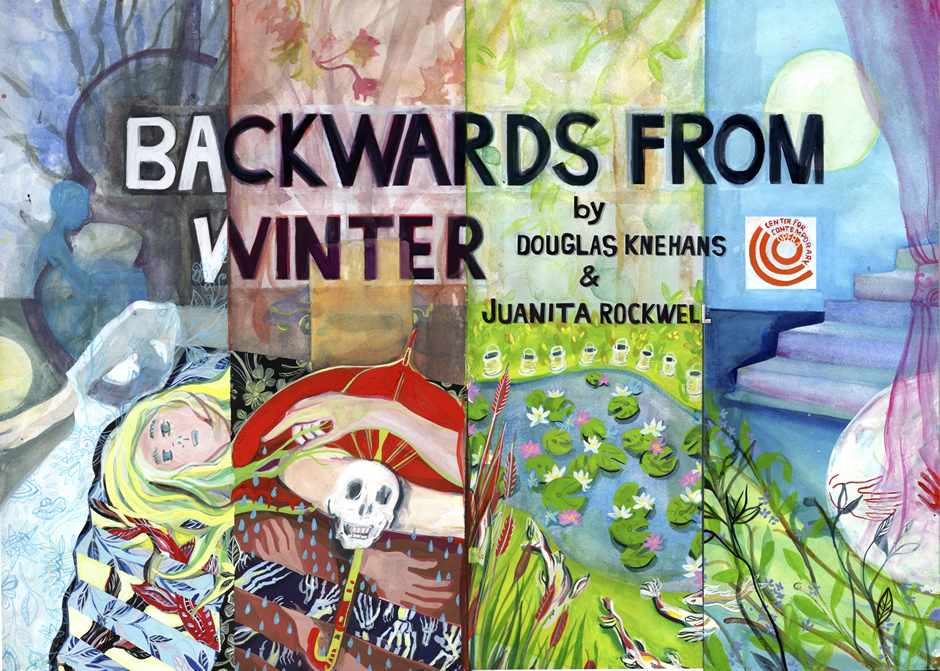 Backwards from Winter is an hour long operatic monodrama exploring a single woman’s reflection on a love relationship as seen through various elemental filters of seasons, color, nature, emotion and memory and told through live voice, live electronic/computer music and multiple video streams.

She traces the past year with her beloved, moving backwards through time: from deep winter where she is in grief over his death, to autumn, where she experiences the sharp pain of losing him in a storm, through the summer’s heat of their passion, to the heart-opening birth of their love in spring.

Just as our conventional experience of linear time can be disrupted by deep grief or joy, this operatic work destabilizes theatrical conventions of narrative, character, psychology, conflict, language and setting as it explores impermanence, loss and love.

With a gift for extravagant color, beautiful melodic style, and engaging, soulfully dramatic work, the music of award winning composer Douglas Knehans has gained attention around the world. Knehans’ two-piano work cascade has been hailed by Fanfare Magazine as “… effective … incisive … hauntingly beautiful …” A disc of his early music for acoustic and electric cello was released on Ablaze Records in the fall of 2010 and was called “amazingly sophisticated … very beautiful … intriguing … captivating …” by Audiophile Audition.

Douglas Knehans has received awards from the American Music Center, the NEA, the Australia Council Performing Arts Board, Yale University, the MacDowell Colony, Opera Australia, The Cannes Film Festival, Carnegie Hall, The Kennedy Center, The National Symphony Orchestra, The Academy of Television Arts and Sciences, Meet the Composer and a host of others. His works have been broadcast on ABC Radio and Television (Australia); NPR and PBS (USA); RAI Radio and Television (Italy); and HTKY, the National Television Broadcaster in Ukraine.

Douglas Knehans received his initial music education at the Australian National University. He has received scholarships and awards from Queens College, CUNY where he gained his M.A. in composition with Distinguished Professor and renowned composer Thea Musgrave, receiving the first Luigi Dallapiccola Composition Award (1991) for outstanding achievement in music composition. In 1991 Knehans entered the Doctoral program at Yale University where he studied with Pulitzer Prize winning composer Jacob Druckman, graduating with the Woods Chandler Memorial Prize (1993) for best composition in a larger form.

As Artistic Director of Hartford’s Company One for six years, Juanita directed early premieres for stage and radio. In 1994 she became the founding artistic director of Towson University’s experimental MFA in Theatre, directing the program for a dozen years. She continues to teach in the grad program at Towson, as well as in the MA/MFA in Creative Writing at Wilkes University, also consulting on its development.

Past project support includes NEA, TCG, ITI, MD State Arts Council; and as writer-in-residence for the Ko Festival, the O’Neill Center’s National Theatre Institute, and the Visual Playwriting Conference at Gallaudet. Juanita is a Fulbright Scholar as well as member of the Society of Directors and Choreographers and the Dramatists Guild.

She recently directed new productions of Mohammed Fairouz’s Sumeida’s Song and Ricky Ian Gordon and Royce Vavrek’s 27 at Pittsburgh Opera; site-specific productions of Don Giovanni, Così fan tutte, La bohème, and Schubert’s Goethe-Lieder; a fully staged Saint Matthew Passion in Cincinnati’s Saint Peter in Chains Cathedral; and a highly acclaimed modern production of La bohème at Miami Music Festival. She has been on the faculties of CCM Spoleto, Miami Music Festival and Seagle Music Colony. Dr. Williams holds an Artist Diploma in Opera Stage Directing from CCM, an M.A. and Ph.D. in Theatre History and Criticism from Cornell University and an A.B. with honors in Interdisciplinary Studies in the Humanities from the University of Chicago.